As this article states there are way more than 10 things you should never do but it is always a good reminder. What else would you add to the list?

There are WAY more than 10 things you should never do as a concealed carrier or as a firearms owner in general.  But we’ve decided to pick 10 extremely important ones.  We’re not judging you if you do these things – we’re just saying it’s the opposite of responsible.

There are a lot of tense, ambiguous situations out there.  Like, maybe you’re debating whether or not you should take a defensive posture and remove your concealed carry firearm or not.  Let’s skip to the chase – if you feel threatened, act accordingly.  That’s all it comes down to.  But DO NOT – repeat, DO NOT – fire warning shots.  If someone doesn’t believe your concealed carry firearm is loaded, they’re welcome to find out the hard way.  Heck, if you have it out already, you can even tell them to chill out on the ground while you wait for police to arrive.  There’s a whole lot of options (A LOT).  Firing a warning shot isn’t one of them.

And in most cases, discharging a firearm within most municipalities or while out in town is an actual crime.  As in, if you discharged that round and police arrive and find that you weren’t actively using that round to defend yourself from an imminent, deadly threat – you’re in hot water.  So, if it’s come to rounds being exchanged – make sure the first one counts.

9.  Pants Tuck Your Concealed Carry Pistol Without A Holster 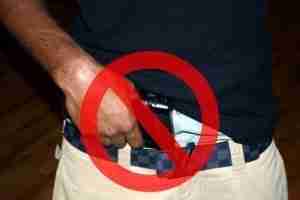 Can’t afford gender reassignment surgery?  Having a hard time hitting those high soprano notes?  Sticking a loaded pistol down the front of your pants isn’t really a good alternative – but it will work!

Holsterless concealed carry isn’t effective.  There’s nothing protecting your trigger guard and even with a tight belt, you’re not really providing good, even retention across the firearm.  It’s asking for a disaster to happen.

Holsters are just like ammunition – a required investment in order to protect yourself.  And there are plenty that are affordable and effective.

If you don’t practice instinctive shooting, don’t expect it to suddenly appear when you pull out your concealed carry pistol.  More importantly, if you don’t practice dry firing, holstering and re-holstering, and do some actual range time once in awhile, those skills are virtually non-existent in your reactive mind – the part of your brain you need to actually respond to an emergency.

7.  Not Paying Attention To What’s Around Your Target

In an actual active shooter environment, you have to stay on top of what is in front and behind the shooter.  Reflexively spraying rounds in the general direction of an attacker is a great way to injure or kill others – with absolutely no guarantee of taking out your target.  So before you fire, look around the target area.  It only takes a few milliseconds and you could save someone’s life.  It’s also a fundamental of firearm safety.  Which brings us to…

6.  Ignoring The Fundamentals Of Firearm Safety

There’s a serious misconception with some concealed carriers that the fundamentals of firearm safety suddenly evaporate if they’re stuck in an active shooting environment.  Nothing could be further from the truth.  Every single round that exits your gun will be investigated when the police arrive.  And if they find you’ve negligently responded to a threat, you’re not going to be the “hero that saved the day” – you’re going to be taken up on criminal or civil charges.

5.  One Magazine And Done

If you have a concealed carry pistol – where’s your number two magazine?  If it’s not on you or nearby, you’re putting yourself unnecessarily at risk.  Like the botched robbery we reported on earlier in Los Angeles and plenty of other places – once the shooting starts, it doesn’t stop until the police arrive, the threat is gone or someone is dead.  If it’s not a direct hit that does it, it certainly will be the first person who runs out of ammunition.  That doesn’t mean you need to walk around with an ammo can.  Just having a spare magazine that’s accessible is (probably) good enough.

4.  Inserting Yourself Into Conflicts

“Equal and opposite reaction”

There is nothing wrong with self-defense.  There’s nothing wrong with helping out someone who is being brutally attacked, robbed, or victimized.  But do understand the legal quandary you’ll be placing yourself in.  We recently reported on a story involving a man who tried to intervene in a domestic assault.  Unfortunately everyone involved, the attacker turned his attention from the woman to him and the man defended himself with one well placed shot from his concealed carry pistol.  Did he do the right thing?  Morally and ethically, he certainly stopped a woman from being assaulted.  He also protected himself from being the victim of an assault.  But law enforcement and county prosecution will ultimately determine the full consequences for his actions.  Make sure – whatever you do – you’re willing to accept the consequences.  And there will always be consequences.

3.  Not Locking Up Your Firearms

If you have children in the house (or even other occupants), you should always secure firearms that are not physically on your person.  In this news report we covered, a burglar was able to enter a woman’s home, grab her shotgun and point it at her before a friend shot him.

We’ve also covered news stories about children whom have gotten into their mother’s purses and either shot themselves or their parents.  This is important!  A firearm is a tool.  It can be used by anyone who picks it up.  And if it is not secured, you are giving them invitation to do so.

There are a lot of fads out there in regards to “new” ways to holster a firearm.  Everything from using a holster system that doesn’t protect the trigger guard to storing it at an angle where it may be easily taken from you – your concealed carry firearm is your life line.  Do not take chances with it.  Do not put it on your body in such a way that it may harm you or others.  If that means wearing clothes that break your status as a fashion icon – so be it.

The most dangerous habit a concealed carrier can get himself into is assuming he knows more than his opponent.  Most people in the United States will be able to live their lives without being the undue victim of gun violence or gun crimes.  For the very few who will deal with it – siding on the side of caution is always the right move.

If you can read minds, great.  For everyone who can’t – never assume anything about your opponent or the situation you find yourself in.  Judge it critically, quickly, and always move towards the option that promises safety first.  Prepare and train for uncertainty and never assume an enemy will act like a paper target – these are good steps towards avoiding overconfidence as a concealed carrier. 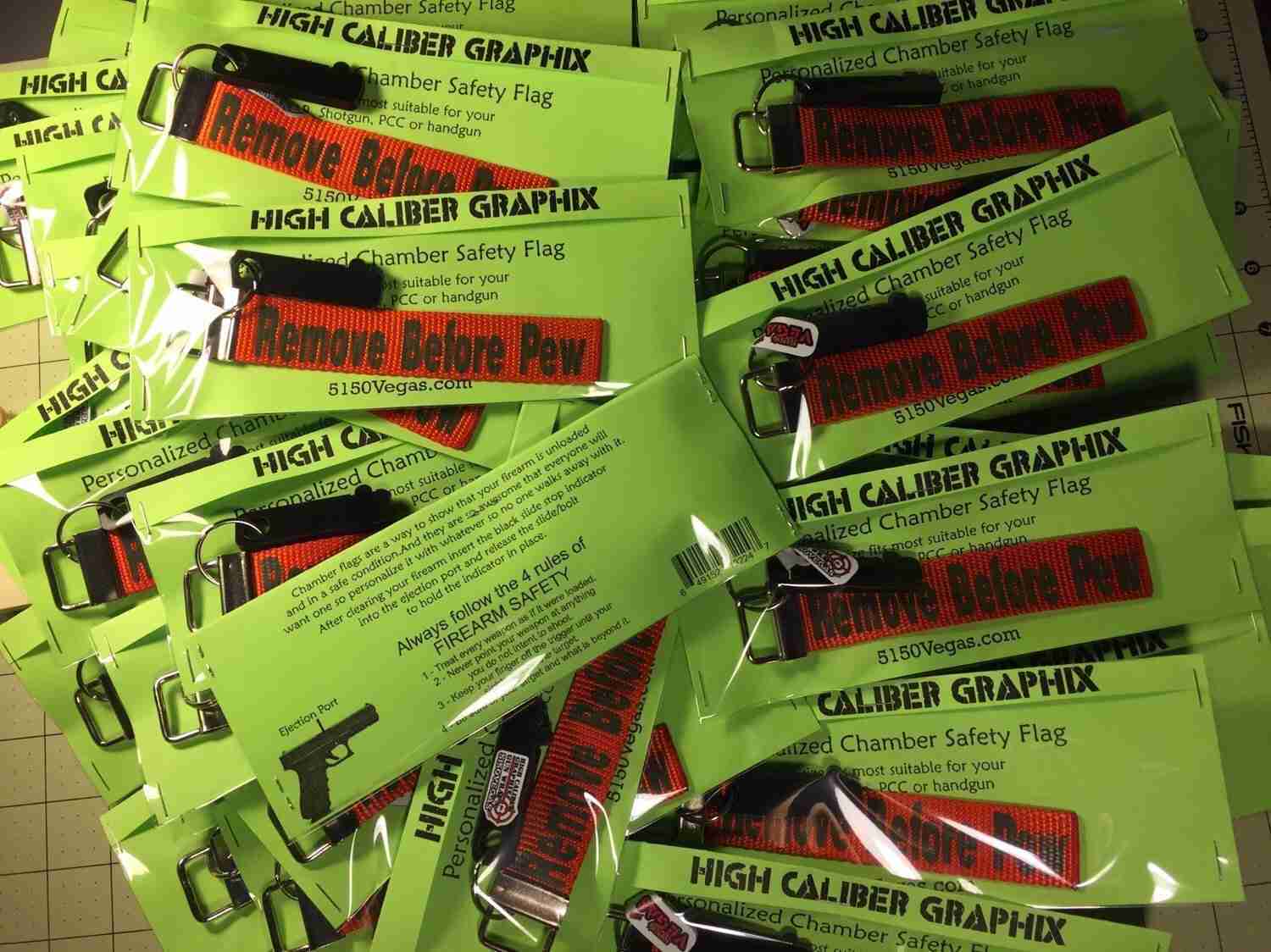 vamtam-theme-circle-post
 Category General Discussion
Are you looking for a personalized gift for a group of your favorite shooting sports...
Read More 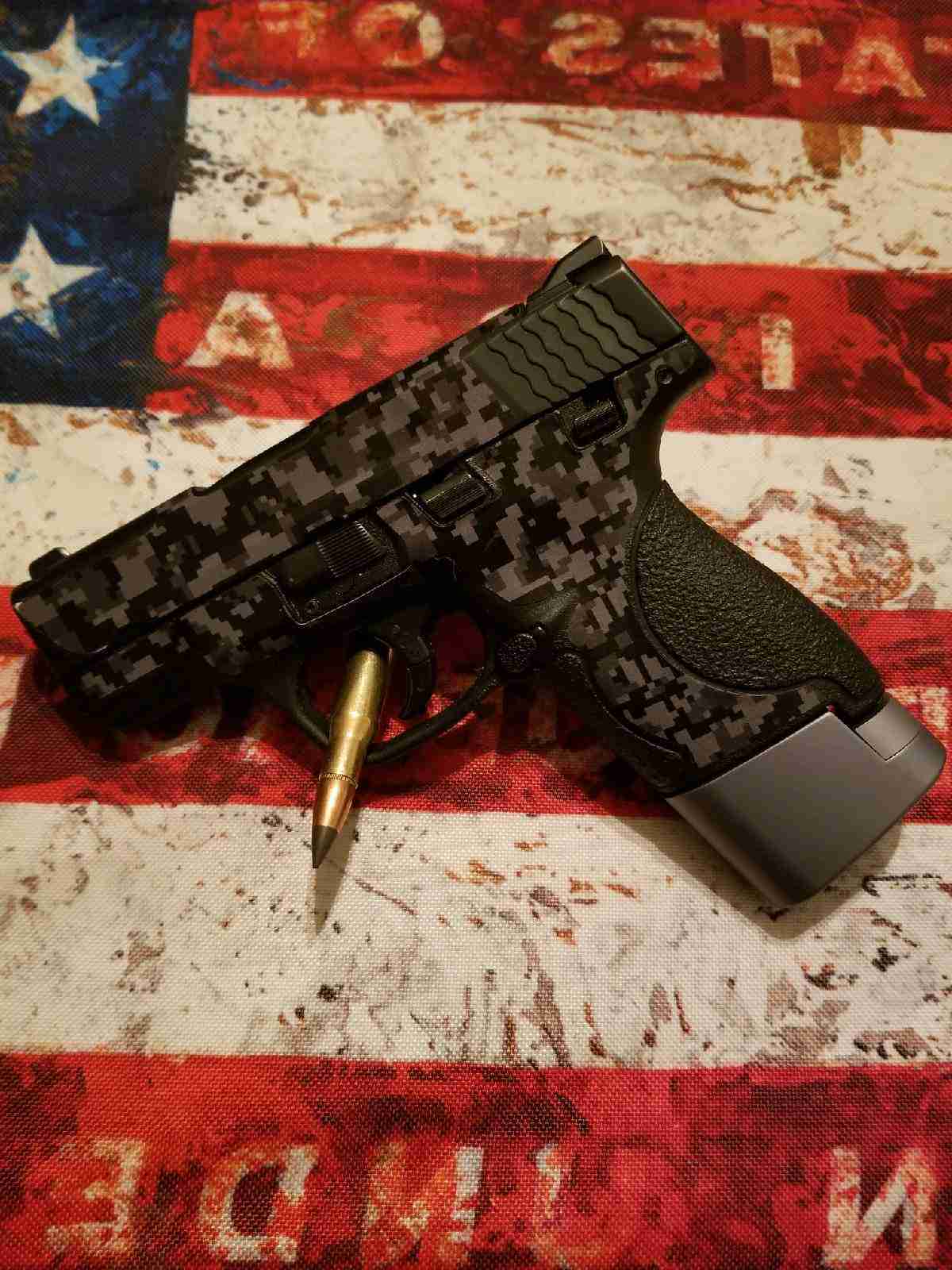